Retrofit of a Waste Processing and Valorisation Plant : reliable control and monitoring with Topkapi

The LEDU Group renovated the control-command of the UIOM in Planguenoual (22). A high availability continuous process controlled from a multi-monitor room using two Topkapi redounded stations.

A waste processing and valorization plant is a continuous process which does not tolerate failure. The site in Planguenoual (22) belonging to the SMICTOM of Penthièvre-Mené and operated by NOVERGIE – SITA Suez Environnement Group, is no exception to the rule.

Rethinking the control and monitoring system with Topkapi software platform

A continuous running furnace of a capacity of 5.6 tonnes per hour processes household waste produced by over 108,000 inhabitants from 82 towns. It runs only on the calorific power of the waste. To valorize the energy produced, a boiler collects the heat to produce steam feeding a turbine: heat is then converted into electricity. A total 42,000 tonnes waste is processed every year, producing 12,500 MWh/year, equivalent to the consumption of 6,800 households.

It is during the renovation of the plant in 2009, which was also awarded the environmental certification ISO 14001 at the time, that the control-command system was fully reviewed: the plant was initially controlled in electromechanical relaying. The implementation of a modern control-command system based on programmable controllers and Topkapi supervision was an opportunity for the LEDU Group, based in Plouagat (22) where it specializes in the integration of automated systems, to show its know-how in this field.

A complete technical solution with Topkapi based on high availability

To meet high availability needs, the plant is fitted with a control room with two hot backup Topkapi servers. Five screens are used to operate and monitor the process. The screens are distributed over each of the two servers – two on one, three on the other – which jointly provide the data processing function (server) and operating station function.

Please note that multi-monitor management is native in Topkapi, whether on a server or a client station. The user freely places his views (diagrams, curves, logs, alarms) on each of the screens, and organizes each station in a differentiated way. This is possible thanks to the environment backup per station and per operator.

As each view is independent, the application does not need to be developed according to multi-monitor management. "This guarantees perfect adaptation of the application to the operating conditions" explains Christophe SENSAMAT, in charge of the Automation Engineering Office of the LEDU Group.

The supervision application provides full control of the plant, from management of the oven regulation loops to fumes treatment. A rather very classical industrial process after all, where Topkapi is at its best. 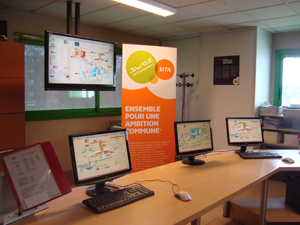